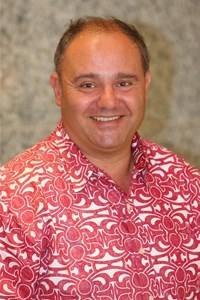 Panos D. Prevedouros, PhD is a Professor of Transportation and Chairman of the Department of Civil Engineering at the University of Hawaii at Manoa where and he developed and manages UH’s Traffic and Transportation Laboratory. He’s a Subcommittee Chair of the Transportation Research Board (TRB), a unit of the National Academies. Prevedouros is a registered Professional Engineer in the European Union, a Court-qualified Traffic and Transportation Engineering expert in Hawaii and Illinois, and an Envision Sustainability Professional (ENV SP). Prevedouros has expertise in urban road network management, traffic safety including incident management, traffic flow simulation, traffic signal optimization, intelligent transportation systems, demand forecasting and alternatives analysis, sustainable infrastructure including transportation, energy, policies and regulation. As of September 2017, Dr. Prevedouros has published 49 Technical Reports, 48 Academic Journal Papers, 45 Conference Refereed Papers, 35 Proceedings Papers, and co-authored the 2nd and 3rd editions of internationally adopted textbook Transportation Engineering and Planning (Prentice Hall, 1993 and 2001.) He has pioneered effective traffic solutions for Honolulu such as traffic underpasses and reversible flow lanes. He’s also developed a realistic plan for Hawaii’s energy future. He blogs on Hawaii’s infrastructure challenges at fixoahu.blogspot.com.

However, (1) certain rural regions contain a relatively high percentage of Hawaiians, part-Hawaiians and Pacific Islanders, and (2) the state Department of Hawaii Home Lands (DHHL) controls sizeable parcels of land, some of which are already developed into housing units and occupied by Hawaiians and part-Hawaiians. To be eligible to occupy the housing, the title holder needs to have at least an one-eighth Hawaiian blood quantum.

The road accident incidence and road accident injury rates of Hawaiians, part-Hawaiians and Pacific Islanders are largely unknown. Their needs and requirements for traffic safety are also unknown.

The primary regions of focus for our research are the village of Waimanalo on Oahu, the all-rural Waianae coast, also on Oahu, and the entire island of Hawaii, locally referred to as the Big Island. Pictured is a head on collision on the Big Island; it occurred on October 14, 2017 (one fatality).